Could your organization provide supplies for a traveling toilet fundraiser? Consider sponsoring this fundraising idea to make new connections!

How to Run a Traveling Toilet Fundraiser

Your organization can start a traveling toilet fundraiser in four easy steps:

1. Acquire some toilets and spruce them up

The number of toilets you’ll need will depend on how many volunteers are willing to help out with the fundraiser, although getting more than one will increase the revenue you bring in. A community dump or junkyard will probably be the easiest place to find free toilets. However, if you find out that a staff member or volunteer at your organization is having a bathroom redone in their home, they may be willing to donate their old toilet to the fundraiser.

Once you’ve acquired a few toilets, you’ll need to sanitize them thoroughly and scrub off any visible dirt. Then, if you have some artistic volunteers, you can make the toilets more visually appealing by painting them bright colors or decorating them with representations of the cause you’re fundraising for.

2. Contact a few supporters who would be willing to go first.

Over time, your community will become aware of your fundraiser when they start seeing toilets in their neighbors’ yards. But some people might become angry with your organization if you just leave a toilet on their property with no warning or explanation.

To reduce the chances of negative reactions, identify a few loyal supporters who you think would be good sports. Contact them individually to let them know about the fundraiser and ask if they’re willing to go first.

These early participants in your traveling toilet fundraiser can also help spread the word about your cause. Once a supporter agrees to go first, ask if they’d be willing to post a photo of the toilet in their yard on social media and tag your organization. Indirect publicity is better than direct marketing for this type of fundraiser in order to maintain an element of surprise.

3. Set up a revenue system

Even your most loyal supporters will likely want the eyesore of a toilet removed from their yards. However, they’ll have to make a donation to have volunteers from your organization take it away.

One revenue system that has been used often for this type of fundraiser and can easily be adjusted for your organization’s needs looks like this:

Print out this information and attach it to each toilet so supporters are aware of the system. Also, remind them that all contributions will go toward your cause.

Before you make your first toilet deliveries, make sure you have several volunteers whose vehicles are large enough to fit a toilet easily. Also, double-check that they and whoever is riding with them can safely lift the toilet in and out of the car together.

For this fundraiser, you could collect donations in-person, through an online donation form, or via text-to-give. Include giving instructions and a contact number for your organization on the information sheet attached to each toilet.

Lastly, you’ll want to create a tracking document so you know which of your supporters has previously had the toilet and how much they paid to remove it. This way, you can make sure to return the toilets only to supporters who paid for temporary removal and not permanent expulsion from their yards.

An Alternative to Traveling Toilets: Flocks of Plastic Flamingos

If your organization can’t find toilets or would prefer not to use them, you can do another version of this fundraiser with plastic yard flamingos.

Ask volunteers to donate some plastic flamingos or buy a large pack of them online for a discounted price. Then, stick a few flamingos in each supporter’s yard to create a small flock (or a “flamboyance,” if you will). For every $5 a supporter donates, your volunteers will remove one flamingo, and an extra $5 allows them to choose whose yard the flamingos will flock to next.

Some supporters might be more receptive to having plastic flamingos placed in their yard overnight than a toilet. However, you do run the risk of supporters being too receptive to the flamingos and wanting to keep them instead of donating! Consider your community and the resources available before choosing an attention-grabbing object to bring to supporters’ yards as a fundraiser.

Since a traveling toilet fundraiser is cost effective, almost any organization can run one. They do need to be held in areas where residences have front yards, though–they don’t work well if most of your supporters live in apartments.

These types of organizations can benefit most from a traveling toilet fundraiser: If you're looking for an inexpensive fundraising idea that's fun for everyone involved (and a little messy, too), consider hosting a pie throwing fundraiser! 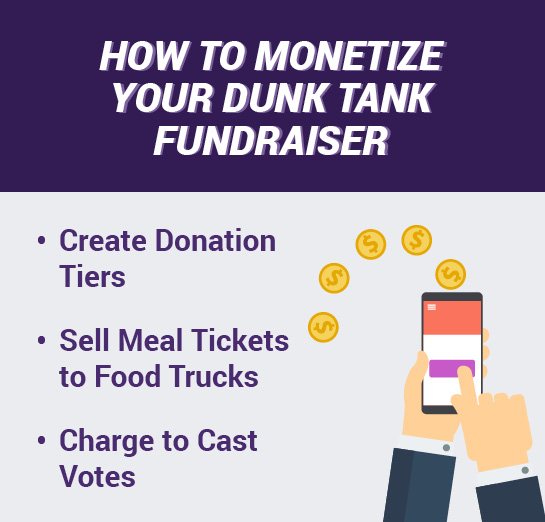 Hosting a dunk tank event is an awesome way to get students excited about donating to your cause. This event is Social media fundraising is free and easy to implement. Plus, it has unlimited reach! Learn more about this fundraising idea here.